Dog heartworm symptoms will almost certainly be completely absent in the early stages of the disease. However, when adult heartworms are present, there are two factors which cause the appearance of tell-tale signs of the disease.

The first factor is that the quantity of worms present cause the obstruction of blood flow to a greater or lesser extent, blood flow is also restricted due to the inflammation within the blood vessels themselves caused by the presence of a large number of worms. The second factor is the damage caused to the pulmonary arteries, these are the arteries within the lungs themselves. 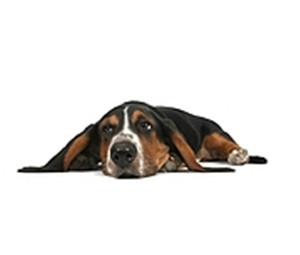 Symptoms of heartworm disease first start to manifest when the L5 larvae (please see article on the lifecycle of heartworms for more information on the larval stages), migrate into the right ventricle of the heart and the arteries around this part of the heart. Unfortunately, damage to the arteries is caused very quickly, within a few days inflammation is caused as the body tries to repair the damage being caused by the worms but sadly, the body cannot keep up with the rate at which the damage is being inflicted and this results in arteries becoming dilated and aneurysms are common as are blood clots and sometimes smaller blood vessels become completely blocked.

This sort of damage is visible on X rays. The body tries hard to compensate for all this damage but as fluid starts to build up round these blood vessels inside of the lungs, there is not sufficient lung area to enable enough oxygen to pass into the circulating blood. So, the dog’s body becomes starved of oxygen resulting in an inability and unwillingness to exercise, shortness of breath and a cough caused by the fluid in the lungs, even a type of pneumonia may also occur.

As more of these almost mature L5 worms arrive in the heart and lung to complete their lifecycle by producing the L1 offspring, things get much worse for the dog. More and more damage occurs. More worms mean that less blood can flow through the heart and lungs causing an increase in the blood pressure and more fluid in the lungs causes the dog to go into heart failure and the symptoms of this become more and more apparent with abnormalities in the heart rythm.

Because of all the damage being inflicted by the worms, the dog’s immune system reacts by going into a sort of overdrive with antibodies causing more inflammation in other sensitive areas such as the kidneys and eyes resulting in even more tissue damage. The end stage of the whole process is called Caval syndrome when almost no blood can get through and the dog collapses and goes into shock.

Sometimes there has been no outward symptom right up until this point in the disease but once Caval syndrome is diagnosed there is often only one course of action open to vet and owner in order to save the dog’s life and that is to operate to remove worms surgically through the jugular vein.

If enough of them can be extracted this way and circulation restored, there is a chance that the dog will recover.

Sadly though at this stage of the disease death often occurs within a very short time.