↓
Home
Skip to primary content
Skip to secondary content
Home→Heartworm Disease News→Heartworm in Every State in the USA – Official!

Results of the 2010 Heartworm Incidence Survey conducted by the American Heartworm Society (AHS), released on May 13th 2011, has confirmed that the veterinary data they analysed from veterinary practices across the US has shown incontrovertible proof that heartworm is now occurring in every state in the USA, even those states previously thought to be ‘safe’ from this horrible disease. The link above takes you to an article on Veterinary Practice News where you can read more. 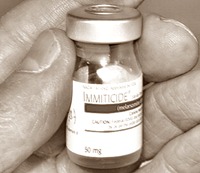 It is known that the preventative treatments widely available cost less than $100 per dog, per year and about the same for cats. However, there is no effective heartworm treatment for a cat that becomes infected with the disease and treatment for dogs is stressful and difficult for the dog as well as the owner. Not to mention the financial burden of around $1,000 and possibly additional medication costs for the rest of the dog’s life due to internal organ damage caused by these parasites.

Another reason why heartworm prevention for dogs (and cats) is so important is that by reducing the reservoir of infected animals for mosquitoes to feed on, the spread of the disease is slowed. In some states such as those more northerly ones where there are few or no mosquitoes for six months of the year, the preventative treatment is only given for the warmer six months of the year. However, with the increased incidence of the disease, many veterinarians are now suggesting swapping to giving preventives for nine months of the year and only leaving them off in the very coldest months.

The advice from the American Heartworm Society is uncompromising. All year round is best because weather patterns in recent years have resulted in mosquitoes emerging earlier in spring and surviving later into the fall greatly increasing the period of risk for domestic pets.

Some pet owners have been caught out when they have taken their pets on vacation with them and found themselves in an area where disease carrying mosquitoes are active at a time of year when they would have expected that their pets would have been safe at home and the pet is not therefore taking the heartworm pills.

The AHS has been tracking the progress of heartworm disease since 1974. Their work has vastly increased the amount of information and advice available to both veterinarians and pet owners.

Their advice has undoubtedly saved the lives of countless pets through their guidance on heartworm prevention. Don’t let your dog or cat become a statistic in their next study, see your vet about heartworm prevention and save yourself and your pet a lot of heartache.