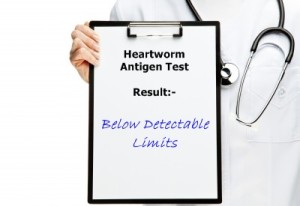 In 2012 the American Heartworm Society (AHS) changed its guidelines on how Vets should report heartworm antigen test results.

Previously, results were either positive or negative, now the guidelines say that if the test does not detect the presence of worms, a result of “Below detectable limits” (BDL) should be reported. Why is this?

The current heartworm antigen test can only detect adult worms if at least one mature female is present. To date, there is no test capable of detecting the presence on only male worms.

False positive and false negative test results can occur. This is why if a positive test result is obtained, further tests will be done before treating a dog with immiticide – particularly if the dog is not exhibiting any symptoms. This could be done by X-Ray or ultrasound or testing the blood for circulating microfilariae.

False-negative tests can occur if the female worms are not mature enough to produce young or if only male worms are present. This is why the advice has been changed to report a BDL result instead of negative.

Advice When You Get a BDL Result

A report I read from VCA Loomis Basin Veterinary Clinic stated that they want to make sure that their clients understand that a BDL result could mean that there is a possibility that their dog could be harboring a very light infection or an early infection from a recent exposure, where the worms have not yet matured into adulthood. They follow the AHS guidelines on annual testing and repeat tests earlier if any animal with a BDL test result exhibits any symptoms of heartworm disease.

Speaking at the Western Veterinary Conference in Las Vegas, Dr. Michael Dryden DACVM stressed that in many dogs, the heartworm antigen test may not be able to detect the presence of worms until seven months after the dog became infected. He stressed the need for the change to “below detectable limits” reporting of test results so that clients did not have incorrect assumptions that their dog was definitely clear of infection.

His recommendation on testing was to do both an antigen and a microfilaria test at the same time and then repeat an antigen test between four and six months after the commencement of a heartworm preventative treatment and then retesting again at one year.

New Guidelines On Confirmation of Adulticide Therapy Results Too

The AHS also advised on confirmation of the effectiveness of Adulticide Therapy (treatment of an infection with adult worms). They state that blood tests showing negative for the presence of juvenile microfilariae, does not confirm that the adulticide treatment has been completely successful.

This could be because immature worms have been able to mature if effective preventative treatment was not given before and during the adulticide treatment. Alternatively, it could be due to a missed dose of preventative causing a window of opportunity for infection to occur.

Antigen testing is the most effective way of confirming the effectiveness of treatment. An antigen test result of BDL is normally obtained by six months post treatment if all female worms have been destroyed. However it is still possible for a BDL result to be obtained under the circumstances mentioned above (where only male worms or immature adults are present).